If you follow the PV industry as closely as I do, you have probably heard enough analysis and predictions to make you nauseated.   In the simultaneous boom and collapse of the PV industry, current events are confusing enough without worrying about possible future events.

Luckily, the largest PV manufacturers are publicly-traded companies, so quarterly financial reports are freely available.  With a little naive diligence, I took these documents and computed a gross cost/watt using quarterly revenue, gross profit margin, and production volume.  This analysis gives a good approximation for pure-play module manufacturers, such as the largest polycrystalline silicon PV manufacturers based in China. 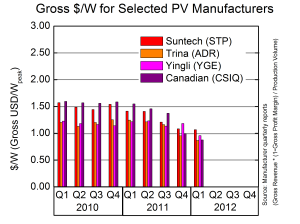 It is interesting to note that the production costs of the major Chinese c-Si players seem to have converged in Q1 2012, perhaps reflecting the growing standardization of equipment and materials for volume manufacturing of c-Si technology.   To date, the most significant driver for the production cost declines of 2010-2012 was the long-term contract pricing for polysilicon feedstock dropping from 80 to 30 $/kg.  Non-silicon costs and efficiency improvements would also work to move down $/W figures, but polysilicon pricing  accounts for most of the production cost decrease. 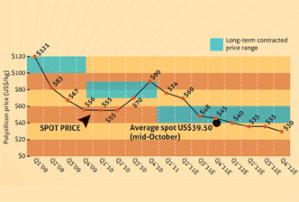 Even with polysilicon prices down from a peak of >100 $/kg to 23 $/kg today, the suppliers mentioned here have all been pushed to negative margins.  One of the biggest challenges for c-Si in the next year will be manufacturing higher efficiency products (such as Yingli’s PANDA) while also slashing non-silicon production costs.

This entry was posted in Data, Solar and tagged solar cells. Bookmark the permalink.